My Mind Will Never Grow Up Completely: Models and Maps that Move

I like to think that I have changed a lot over the many years of my life, but I am still fascinated by similar things. I have always liked complex models. When I lived in California and my children were homeschooling, we would take them to interesting places like the Exploratorium in San Francisco, which is so full of fascinating models and experiences it is a bit overwhelming and exhausting. On the opposite end of spectrum was an airplane hanger sized of the Sacramento-San Joaquin River Delta, a single purpose venue, which was so much more interesting for me than for the kids who were almost immediately bored. But I know I would have been fascinated by this three dimensional moving map when I was ten. My interest has always been drawn to representations of the flow of life, fluids, people, and objects and maps which represent actual or imagined places. Part of the reason I have not done much modeling is that I haven’t the dexterity or patience to put things together so that they will work in the way I want them to. So I am always drawn to actual working models of complex systems. They fire my imagination.

When I was a young child growing up in Sacramento, CA, my father worked on the sixth floor of the DMV building which overlooked the huge freeway interchange of I 50, I 80, and I 99. The freeways were elevated over the tree lined grid of downtown Sacramento streets with cars moving over and under at all different speeds and destinations some possibly international or thousands of miles east maybe even ending at the Atlantic ocean. From the sixth floor these cars and moving people looked like a model of a city to me, and I thought about how you could build a model with small mechanical vehicles and trains and people, and program it with some random movement generators that had some algorithms that would govern the movements. You could set this model in motion and it would be fascinating to watch and record the different patterns that occurred. Of course, as a child, I had no words like algorithm or program to label the parts of my concept. For me, the ideas were somewhere between imagination and the world I could see. I had no way to make what I imagined at the time. My father was working on computers using tape drives and punch cards which took up huge rooms in the basement of the building. I would not even work on a computer until I got a Commodore 64 15 years later to help me with word processing for college.

The way I saw the city from my father’s office was the way my mind moved in the world by mapping out the landscape emotional and physical. I suspect it is also why I am such a slow processor in real time situations, always drawing maps of conversations and connections, interactions, always reconsidering routes and possible outcomes. I have at least come to a place in my life where I can just relax and trust that I will be ok if I just act with empathy and kindness as I go through my day. So in that way I have been able to become more able to be more present, but I am still more comfortable when I can have time to think things through a little. I am basically the same person as ten year old me, but more balanced and thoughtful about my effect on other people. I still have an imagination that is enraptured by toys and intricate models. I still lack the skill or patience to bring my conceptions to life.

When I stumbled on this artist’s working model of a city, my brain lit up with the feelings of a ten year old boy trying to fit all the complexities of mobile urban life into a simple framework that I could play with. In many ways I still have a lot in common with that little boy looking out over the city, overwhelmed by the complicated interweaving of lives and objects in motion. I will probably never see this exhibit in motion but I know if I get to Los Angeles in the next year this is one place I will be going. 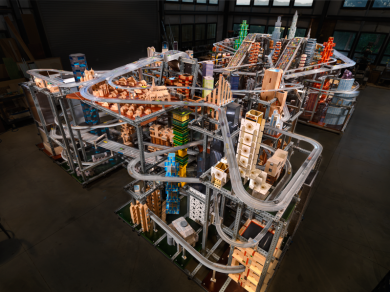 Chris Burden’s Metropolis II is an intense kinetic sculpture, modeled after a fast paced, frenetic modern city. Steel beams form an eclectic grid interwoven with an elaborate system of 18 roadways, including one six lane freeway, and HO scale train tracks. Miniature cars speed through the city at 240 scale miles per hour; every hour, the equivalent of approximately 100,000 cars circulate through the dense network of buildings. According to Burden, “The noise, the continuous flow of the trains, and the speeding toy cars produce in the viewer the stress of living in a dynamic, active and bustling 21st century city.”

See Metropolis II in action (no reservation required): at