A Couple of Mind Games 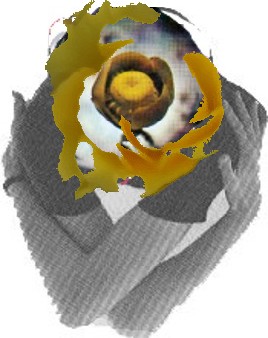 “It took me no time at all to notice that this nothing, this hole where a head should have been, was no ordinary vacancy, no mere nothing. On the contrary, it was very much occupied. It was a vast emptiness vastly filled, a nothing that found room for everything– room for grass, trees, shadowy distant hills, and far above them, snow-peaks like a row of angular clouds riding the blue sky. I had lost a head and gained a world.”

D. E. Harding “On Having No Head” included in “The Mind’s I” by Hofsteader and Dennet.

I really relate to this feeling at times. Try having no head: it is a mind-blowing experience.

Zen is like a man hanging in a tree by his teeth. His hands grasp no branch. His feet rest on no limb, and under the tree another person asks him: “Why did Bodhidharma come to China from India?” If the man does not answer he fails: and if he answers, he falls and loses his life. Now what shall he do?”

I say the man could hang in a small tree and maybe only sprain an ankle.

Or if he was good at ventriloquism, he could answer safely, but still a good round of therapy wouldn’t hurt.

But the real question would be “How in the hell did you get in that stupid position?” and then of course you would go for help. What kind of sadistic asshole is going to ask some Buddhist history question.

If I was a ventriloquist and in the tree (like that would ever happen) I would answer, “Why don’t you look it up later. Meanwhile could you find a fucking ladder or a few cushions.”
I guess I’m not in a zen space today.

This entry was posted in Other peoples words, philosophy, Questions and riddles, Teaching and Learning, whereever you go there you are and tagged D. E. Harding, Hofsteader and Dennet, Mindworks, Paul Reps, the Mind's I, zen, Zen Flesh Zen Bones. Bookmark the permalink.

2 Responses to A Couple of Mind Games